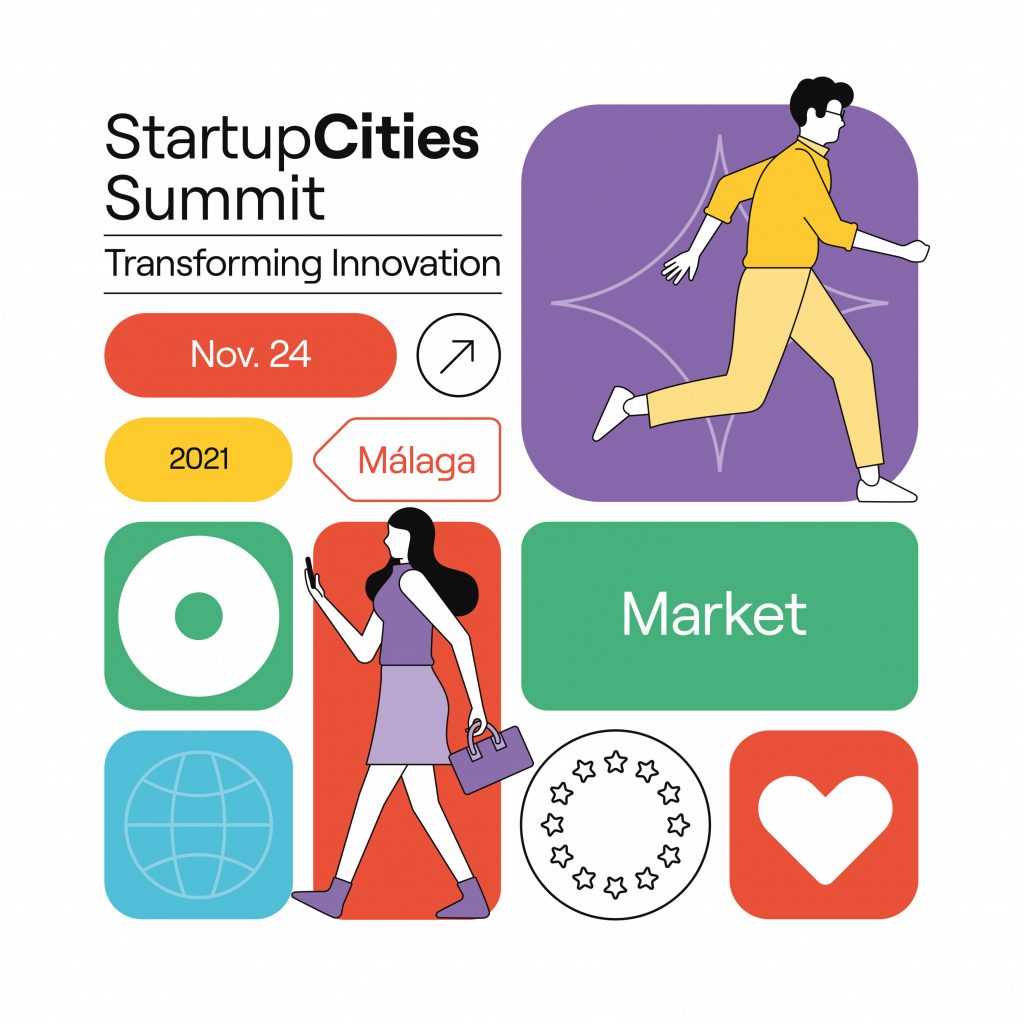 Organised by Promálaga, the summit will be held at FYCMA (Trade Fairs and Congress Centre of Malaga)

More than 170 startups and entrepreneurs will meet in Malaga with other organisations, public administrations, and investors to share ideas, present solutions and find new business opportunities.

In addition, nine cities from eight European countries co-organising this meeting will show the projects they are carrying out to boost their entrepreneurship ecosystems through four thematic areas: markets, talent, women, and young.

11/10/2021.- Malaga City Council, through Promálaga, a company belonging to the Area of Tourism, City Promotion, and Investment Attraction, is organising the first face-to-face edition of Global StartupCities Summit, that will take place on the 24th of November at FYCMA (Malaga Trade Fair & Congress Centre). During the summit, more than 170 entrepreneurs and emerging companies from 11 European countries will meet with other organisations, public administrations, and investors to share ideas, present solutions, and find new business opportunities.

The Mayor of Malaga, and CEO of StartupCity Málaga Francisco de la Torre, accompanied by the Deputy Mayor for Tourism, City Promotion and Attraction of Investment, Rosa Sánchez, and the founder and coordinator of the Global StartupCities Initiative, Arturo Villar, has presented this pioneering summit, in which nine co-organising cities, from eight European countries, will showcase projects and initiatives that are being carried out within their territories to promote entrepreneurship ecosystems around four accelerators: markets, talent, women and young.

Thus, together with Malaga, the StartupCities of Braga (Portugal); Cluj-Napoca (Romania); Cologne (Germany); Heraklion (Greece); Ostrava (Czech Republic); Valencia (Spain); Vantaa (Finland) and Varna (Bulgaria) will participate in this first face-to-face edition of the summit. In this regard, all cities will work as one in showcasing their resources for a multiplier effect in the common drive of their innovative agendas at local, national and international levels.

The content program will have speakers of the highest level and will address cross-cutting themes such as new businesses in the circular economy; citizen participation at a global level; geostrategic location, an international program for entrepreneurial villages, known as StartupVillages; global talent trends or client access program for start-ups; as well as other specific topics such as the areas of global innovation in agri-food, climate, electronic sports/video games, mobility, or health.

The opening ceremony also includes the virtual participation of the Commissioner for Innovation, Research, Culture, Education and Youth of the EU Mariya Gabriel, who is the honorary ambassador of the initiative and will advance the strategy that is being defined in Europe regarding these matters.

To promote entrepreneurship and business opportunities, the startups participating in the summit will have at their disposal an agenda management tool (matchmaking) through the virtual initiative FYCMA On. This tool will allow them to organise professional meetings with other participants in the event, including other emerging companies, investors, and public administrations at an international level. This is one of the main objectives of this pioneering initiative: to connect innovation ecosystems, their companies, and entrepreneurs to take advantage of the potential of the European single market and globalisation.

In this regard, startups, investors, and institutions from the Malaga ecosystem will be present to promote technological developments and generate visibility at the European level of Malaga projects. Thus, Malaga is consolidating as a benchmark ecosystem in promoting entrepreneurship projects by fostering opportunities for startups and companies with growth potential at a European and international level.

More than 30 innovative cities worldwide also participate as global co-organisers in this meeting in its virtual format, through an audio-visual presentation of their main initiatives around the promotion of startups and the application of disruptive solutions in their territories.

All proposals are included in the content program for this edition and available on the Global StartupCities Summit website to promote the interconnection of entrepreneurial environments globally. In addition, other participating ecosystems will be able to promote their primary assets and point out opportunities to invest and engage with other territories within the cross-cutting movement from bottom to top #EiA – European Innovation Area-.

Likewise, this edition adds an agenda of virtual meetings from November 22 to November 26, designed to interconnect participants from any part of the world who cannot be present at the summit in Malaga. The program of this online meeting will be organised by continents as follows: November 22, Asia Day; November 23, America Day; November 25, Africa Day and November 26, Oceania Day.  The participants are entrepreneurs from each geographical area, seeking a connection with peers and investors and other innovative agents in the European continent.

The meeting is co-organised by the Malaga City Council through Promálaga in collaboration with the StartupCities of Braga (Portugal); Cluj-Napoca (Romania); Cologne (Germany); Heraklion (Greece); Ostrava (Czech Republic); Valencia Spain); Vantaa (Finland) and Varna (Bulgaria), with FYCMA being the face-to-face venue of the Summit.

This Summit has an international scope, and it was created with the aim of being held annually in a different country or continent. Malaga won the nomination to be the official venue in 2020, but due to the pandemic it could not be held on-site. Although it was adapted to an online format on 25 November, it was decided that the 2021 summit would take place in a face-to-face format in Malaga.

It should be noted that the Global StartupCities Summit is part of the pioneering and transversal bottom-up #EiA – European Innovation Area – led by local actors and with the official support of the European Commission, to boost local innovation ecosystems in cities and towns, including rural and remote areas, and to ensure that no one is excluded no matter where they are located.

Techcelerator brings to Romania the Venture Program, a pre-accelerator offered by EIT Digital

Techcelerator brings to Romania the Venture Program, a pre-accelerator offered by EIT Digital